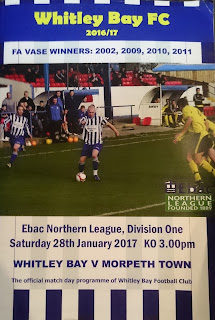 The last few years of supporting the Bay have, I have to admit, been hard going. As one of the biggest clubs in the Northern League, I don't think I'm being arrogant in saying this, we have had some pretty lean times since the glory Vase years and 2012 seems a long time ago in a galaxy far, far away. Having said that, there have been some highs: last season's run in the FA cup being one, but mostly it has been hard going. Just like that team in the big Toon, we are living on distant glories, as Wednesday's 4-0 defeat away to Shildon in the league cup demonstrated.
So, today, I was not relishing the visit of the 'big boys' from Morpeth. Their fanbase is still growing on the back of their Wembley Vase victory and their ground is picturesque but low on capacity. On the pitch they have a strong team that the Bay have struggled to match recently. Two 3-2 defeats at the 'Peth may seem close in scoreline but in the Northumberland Senior Cup especially we were extremely lucky not to lose by more and only some saves from the flying Flynn and last ditch defending from a fearless Bay defence kept the lads in the game.
First topic of conversation: Aldi! Again!! Entering the car park it was once more packed. Saturday Aldi shoppers? Can't you use your own car park? Having just watched the first half hour of my French team RC Lens and witnessed them losing 2-0 at home to the crocodiles from Nimes; I was in an angry, and maybe slightly petty, mood and that was after recovering from the Trumpiness over the pond. Does he realise what his surname actually means in the Queen's English?
However, it was great to see more hard work had been applied to the pitch and the conversation with
Mr Twitter and co turned to the noble state of the pitch: it had been mowed, rolled and.....dedivoted! Bravo to all those who gave up their time and apologies that I wasn't one of them. Sorry.
It was also good to see, for the second home match running the return of Russ: the supporting legend of the Vase era. He was in a fine, lubricated voice too and thoroughly proved my theory that sound can travel faster than light. Managing to organise his work to get to the match was the Bay's gain.
Talk of the pitch turned to the vision of not one but three versions of wrestling's Stone Cold Steve Austin! The bonces of the nearest linesman, referee and Morpeth's Keith Graydon all glinted in the fading afternoon sun to add extra spice to our off-track conversation. This went further off-piste, so to speak, as the subject of the original Steve Austin: the six million dollar man crept in. What were his bionic powers? Later on, the subject of the bionic woman came up and her super powers? Glad to say, Russ could recite the whole of the opening sequence to the original 70s series. Time well spent studying there! Of course a quick search on Google sorted out our conundrum on powers during a quieter moment of the first half.
The lads looked up for the game and were not giving any quarter but still flying Flynn had to be quick off the mark twice in the opening quarter of an hour to race out and clear from advancing strikers. The first occasion, the ball rebounded kindly for the Morpeth forward who shot past Tom but thankfully SuperMac was back to clear off the line. Flynn was then called on to make a fingertip save to keep out another spectacular effort.
The Bay were giving as good they got and new boy Gilbey's run into the box and pass found Peter Glen Ravenhill (PHR). Unfortunately, despite the pitch's good condition, he couldn't pull the ball from out of his feet and his shot lacked power and was easily collected by the green-clad (or was it yellow?) Dryden in the Morpeth goal.
There was better to follow when a bit of magic from both Potter and Thibault ended up with Professor Wilko heading home. Bay in take lead shocker!

It could have been better a couple of minutes later but PHR's shot flashed wide after great work from Tom Gilbey, racing through on the Bay's right hand wing. They were both working hard and almost had their reward.
Our jollity and merriment lasted four minutes before Morpeth's Mark Davidson rose unchallenged to head home. 1-1.  There was time for the mesmerising Gilbey to clear off the line as Morpeth pressed hard for the lead. Still it was better than we had expected: the lads were level at half time and we had taken the lead.
The Bay kept Morpeth waiting so there was plenty of time to discuss the farce that had been South Shields v Morpeth in the FA Vase with my 'Peth fan Keith. He, along with many others, had been stunned when their game had been replayed after 'Peth had just scored to lead 4-2 against 10 men Shields when the floodlights had mysteriously failed. Losing the replayed game 4-0, hastily organised at Morpeth in barely 4 hours, had exacerbated him, although his daughter, Eve didn't seem as concerned and a lot calmer about the affair.
There was more acrobatics from Flynn, saving another one v one, as Morpeth pressed. The visitors were not having everything their own way as two close offsides deprived the Bay of goalscoring chances. However it was Tommy Flynn who was working overtime, acting as an extra sweeper then racing back to make saves on his line. On 77 minutes he performed more heroics as he sprang acrobatically with a diving-swing-spring save to keep the scores level.
Finally, the pressure paid as man of the match Flynn was caught out of position, after another super save, and Sean Taylor scored into the empty section of the goal.
But still the Bay weren't finished and a belter from SuperMacD was palmed away by Dryden.

The 2-1 win hadn't flattered the visitors but the lads had worked hard and all over the pitch there were great signs that the Nash/Woodhouse/Moore era was bearing fruit with a greater emphasis on playing confident football. The aim now is to not to panic and support the management trion both on and off the field and allow them time to develop this young, talented team. If the lads can stay together for next season then all the hard work will be worth it. Just need to get a few wins to get the confidence to go with the hard work. Easy!

Posted by WBayblogger at 03:13 No comments:

Basically, we owed this lot a return leg pasting. The worst afternoon many of the Whitley faithful had ever witnessed was the 6-1 thrashing at the home of our visitors. Nothing went right that day with crucial injuries and a distinct lack of substitutes meaning a miserable trip home on the first day of October.
My first rant of the day came when we watched a number of cars parking in our car park so their owners could go and visit Aldi. Hasn't the supermarket got its own big car park? I think if someone parks in our car park then they should be made to join us at Hillheads! Where were our hordes going to park their cars? Parking rage got to me!

Mr Twitter had been working imaginatively of late to enhance the Club's Twitter feed and his latest offering was the team sheet picture. Seven of the 11 who had taken the field for the Bay in October were in the starting line-up today and it was nice to see our our own Eiffel Tower of a player, Thibault Charmey, given his place in the starting line up after featuring in a great team performance at Chester-le-Street which saw the Bay win 4-0. Also making his home debut was new signing and Durham Uni student, Tom Gilbey to bring the number of Toms on the team to 3...was this a Bay record?
The Tom Trio (and the rest of the team) started brightly and the Bay attack was causing the visitors problems, forcing errors in every position.However, as the half progressed, Red Star began to ease themselves into the game.
Gilbey was looking confident and both he SuperMac were supporting our two wing wizards: Kempster and Potter. Also looking bright was Kyle Patton who was being sent chasing some great balls from big brother Callum. Unfortunately his lack of physical presence meant he generally came out second best to the larger visiting defence.

After 16 minutes, it was our former favourite Birdy Bird who forced Flynn into a great save. This warning wasn't heeded and a few minutes later, Birdy was in on goal. The fit-again Wilkinson challenged him and was penalised by a penalty that Craig Lynch hit low to Flynn's right. Thankfully, the Prof wasn't booked. Next thing we knew, Callum A. was booked for kicking out at a Seaham midfielder as he was disappearing off into the horizon. The game had been turned on its head.
Next Callum Patton did an excellent impression of Superman as he avoided any contact with a defender's foot by flying horizontally over the challenge. The extremely tall linesman was only able to rely on his bird's eye view so he flagged for a penalty. Nice one! As the former Voice of the Bellend put it..."I could have fitted my grandma into that gap..." He's been missed!
Superpatton it was who took the penalty. 1-1

Better was to follow as the Bay went onto the attack again. This time it was Monsieur Charmey who robbed a defender and rolled the ball across the goal. We (me and the Boy Mark) thought that it had hit a divot and bounced past the unhappy Shawn Newbrook in the Seaham goal but it turned out to be Kempster's outstretched foot. A much happier half time crew headed for Tommy's.

Unfortunately just two minutes into the second half, Professor Wilko employed a less than studious tackle to give away another penalty that was confidently dispatched by Lynch again. Seaham went on the offensive and with 18 minutes remaining took the lead. Bradley Staunch powering a header home to make it 3-2. Revenge for October looked unlikely.
Then it was the Bay's turn to wake up for the rest of the match as they battered the visiting defence. Marshalled well by Wilko and Nick Allen, the defence pushed up the pitch as a unit to deny the Seaham midfield any time or space space to operate in and time and again they picked up clearances and began setting up attack after attack. The exhausted Thibault was replaced by Brooks and Callum Anderson by Peter Glen-Ravenclaw sorry, Ravenhill and the visiting defence were creaking. Brooks finished off a great move at the far post only to be denied by the offside flag and Newbrook was being tested from every angle.
With the game looking over, it was Super Gilbey who effortlessly curled the ball past Newbrook's outstretched arm and into the top corner of the net! 3-3: hardly a reward for the possession and effort put in but justly deserved.

As a footnote: Morpeth Town were winning 4-2 at ten man South Shields when the floodlights failed with 7minutes remaining of their FA Vase tie. Did someone forget to put 10p in the meter?
Posted by WBayblogger at 09:29 No comments: